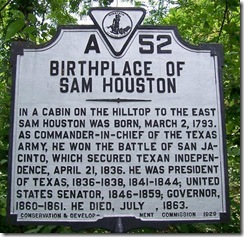 Location: On U.S. Route 11, 5.3 miles north of Lexington at Sam Houston Wayside, the Timber Ridge Presbyterian Church is located behind the wayside. When traveling north on Route 11 the wayside is the on the right, past the underpass for Interstate 81/64, exit 195. Erected by the Conservation & Development Commission in 1929. 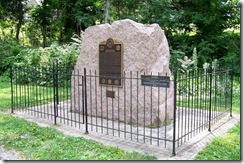 Until I came across this marker, I did not know that Sam Houston had been born in Virginia.  I have discovered many individuals were born in Virginia then later went on to achieve fame in other parts of the country.

Sam Houston was born here north of Lexington, VA on March 2, 1793, the fifth child of Samuel and Elizabeth (Paxton) Houston, on their plantation within sight of the Timber Ridge Presbyterian Church. He was of Scots-Irish ancestry and reared Presbyterian. He attended worship and Sunday School at the Timber Ridge Church, located behind this marker. When he was thirteen years old, his father died; some months later, in the spring of 1807, he emigrated with his mother, five brothers, and three sisters to Blount County, Tennessee. 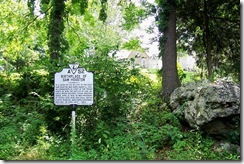 A great deal has been written about Sam Houston and I will not attempt to repeat in all, but there are a few facts that I found interesting. He did a wide variety of different things during his life and you find out a great deal about his life by a search on the internet. For example, in his teens he lived among the Cherokees along the Tennessee River. He joined the United States Army as a twenty-year-old private and by the end of the year 1813, he was given a commission as a third lieutenant. As part of Andrew Jackson’s army, he fought at the battle of Horseshoe Bend on the Tallapoosa River on March 26, 1814 where he received near-fatal wounds.

In 1818, he read law in Nashville for six months and opened a law practice in Lebanon, Tennessee. He received steady and regular promotions in the state militia during his time in Tennessee. He held public office as attorney general in Nashville, elected to the U.S. House of Representatives, and was the Governor of Tennessee. He also stood six feet two inches.

On January 22, 1829, he married nineteen-year-old Eliza Allen of Gallatin, Tennessee. After eleven weeks and amid much mystery, the marriage ended. Eliza returned to her parents’ home. Extremely distraught, Houston abruptly resigned as Governor on April 16 and fled west across the Mississippi River to Indian Territory. Both parties maintained a lifelong silence about the events that ended their marriage.  Houston’s exit brought the Tennessee phase of his career to an end. If not, for this event in Houston’s life, he might never have ended up in Texas. Houston eventually remarried and had eight children.

There is another stone marker with a bronze plaque next to this state historical marker that was donated by the Kiwanis Clubs of Houston, TX and Lexington, VA. This marker has many facts about Sam Houston in Texas and I have included the text. 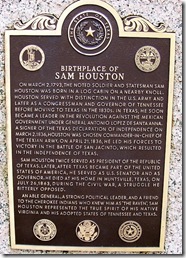 Marker Text: On March 2, 1793, the noted soldier and statesman Sam Houston was born in a log cabin on a nearby knoll. Houston served with distinction in the U.S. Army and later as a congressman and governor of Tennessee before moving to Texas in the 1830s. In Texas, he soon became a leader in the revolution against the Mexican government under General Antonio Lopez de Santa Anna. A signer of the Texas Declaration of Independence on March 2, 1836, Houston was chosen Commander-in-Chief of the Texian army. On April 21, 1836, he led his forces to victory in the Battle of San Jacinto, which resulted in the independence of Texas.

Sam Houston twice served as President of the Republic of Texas. Later, after Texas became part of the United States of America, he served as U.S. Senator and as Governor. He died at his home in Huntsville, Texas, on July 26, 1863, during the Civil War, a struggle he bitterly opposed.

An able general, a strong political leader, and a friend to the Cherokee Indians who knew him as “The Raven”, Sam Houston represented the true spirit of his native Virginia and his adopted states of Tennessee and Texas.

This Monument, erected September 11, 1986, replaces the original, erected June 11, 1927. Both were donated by the Kiwanis Clubs of Houston, TX, and Lexington, VA.